You are here: Home / yoga / Must See Exhibit on Yogic Art at the Smithsonian Museum in Washington DC

Mandala at the beginning of the exhibit

Attention, yogis! If you are in Washington DC any time from now until January 26, 2014, you have an amazing opportunity to view the world’s first exhibit of yogic art at the Smithsonian’s Arthur M. Sackler Gallery. Titled “Yoga: The Art of Transformation,” the exhibit is a comprehensive and thoughtful look at yoga spanning the 3rd century to the early 20th century, through more than 120 works of sculpture, carvings, manuscripts, paintings, murals, photographs, books, and films.

The first half of the exhibit traces yoga’s early visual culture through the lens of the Hindu, Buddhist, Jain and Sufi traditions, and explores artistic interpretations of the yogic practices of meditation, austerity, and asanas, and the metaphysical connection between energy (through nadis and the chakras) and the body. Highlights of this section include ancient temple statues of fierce yogini goddesses; a teak statue of a meditating Hanuman in baddha konasana (bound angle pose) with a strap around his knees; a vibrant gold-leaf and watercolor painting of Krishna revealing himself in the Bhavagad Gita; and an intricate hand-painted scroll showing the chakras and the cosmos.

The second half of the exhibit focuses on the East and West’s perception of yoga and its practitioners. Detailed watercolor and oil paintings from the 16th and 17th centuries trace popular themes in India of yogis being wise sages, divine seers, evil wizards, brave heroes, or ascetic princes. Old black and white photographs, sideshow posters, and films from the 19th century show the West’s fascination with yogis as sly imposters, exotic oddities, or remnants of a once great civilization. The exhibit examines the inception and development of modern day yoga by displaying books written in the early 20th century by Indians and Westerners that promoted yoga as a “health giving, vitalizing, beautifying regimen” or sequences as exercises for fitness, and body building. Highlights of the second half of the exhibit include a 1907 German translation of a hatha yoga treatise that is the earliest illustrated compilation of asanas, and (my particular favorite) a 1937 digital film (a copy of a lost black and white film) of Krishnamacharya and a youthful Iyengar embodying sthira (steadiness) and sukha (lightness) as they masterfully flowed through sequences of amazing poses.

I highly recommend visiting Yoga: The Art of Transformation. It was thoughtfully curated, and deepened my understanding of the history of yoga.  The few hours I spent at the exhibit were a gentle reminder that yoga is not just the asanas we perform when we practice at the studio or at home, but that it is a mind, body, and spirit practice that is rooted in centuries-old tradition, tenets, and philosophy.

This is a gem of an exhibit, and with the free admission through the Smithsonian, visiting it should be on your short list of things to do in Washington DC. But if you aren’t able to be in Washington DC before the end of January, don’t worry. The exhibit moves to the San Francisco Asian Art Museum from February until May 2014 and from there, to the Cleveland Museum of Art from June to September 2014.
Details:
Yoga: The Art of Transformation
Until January 24, 2014
Smithsonian’s Arthur M. Sackler Gallery
1050 Independence Avenue, SW
Hours: Open 10 a.m. to 5:30 p.m. every day except December 25, 2013.
Admission is free.
Public Transportation: Smithsonian Metro stop.
Questions? Call 202.633.4880 or visit http://asia.si.edu/explore/yoga/ 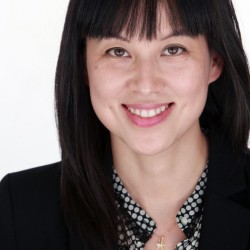 Phoebe Liu
Phoebe Liu is a certified yoga teacher with a background in Iyengar and hatha yoga.Her practice emphasizes proper alignment and the breath.Phoebe firmly believes in the power of yoga and meditation to calm the turbulence of every day living, and especially stress and anxiety caused by the workplace.She teaches classes in downtown Los Angeles and Santa Monica.She can be reached at yogawithphoebe@gmail.com.

Latest posts by Phoebe Liu (see all)
« 10 Kriya Techniques for Reducing Ego + Stress
“Get out of your own way, and practice” – This Week’s #yogachat »

The only relevant yoga is “your yoga”. #sharey

Raise your words, not your voice. It is rain that

Do practice while you can. You'll need it when you