You are here: Home / yoga / Finding your way hOMe

One very cold, very dark, and very early morning in January, I crawled out of my bed and slipped on the clothes I had laid out the night before. I bundled up and walked a hundred feet to a temple.  The temple was crafted of logs and looked perfectly at home in the Rockies of Colorado where it is situated.  As I walked in, I was immediately enveloped in the scent of incense and the sound of bodies moving about, getting settled and shedding layers.  Other than that, it was silent.  The lighting was soft and most of it was cast on the statues placed at the front of the temple.  The Buddha, Dancing Shiva, Ganesha were all in attendance as well as a handful of others that I was unfamiliar with.  I found a cushion somewhere in the middle of the room and settled in. For what, I wasn’t exactly sure.

It was my first morning of teacher training at Shoshoni Yoga Retreat and Ashram in Nederland, Colorado.  I was nervous.  It was my first time away from my 2 year old and I had only been to one ashram previously.  I had signed up for the teacher training on a whim.  Would I like it?  Would two weeks there seem like an eternity?  I have struggled my whole life with organized religions of all sorts, would their Buddhist and Hindu beliefs be more than I could handle?  Well, I was about to find out.

At five am all movement ceased and a deep resonating sound began.  It sounded like it was coming from the bowels of the Earth.  Gradually the sound spread throughout the room as one and then another joined in. ” Oooommmmmm….”  It was a continuous Om.  Everyone kept joining and fading in their own time.  I have no idea how long it went on.  It could have been forever or a moment.  As it resonated throughout my body, all my senses became aware of only that sound.  I could feel its vibration.  I could hear the many notes that all blended into one.  This total immersion into one great sound – the original sound it has been called – was the most vibrant, peaceful, all encompassing moment I had ever experienced.

Chanting OM was the most vibrant, peaceful, all encompassing moment I had ever experienced.

As the sound faded and we dropped into silent meditation, I could still feel the vibration within.  I could sense the energy continuing to go out from our tiny little temple in the mountains and into the world where everyone began to vibrate with us.  I knew then, that when we all vibrated at this frequency, the world was a lighter, more beautiful place.

This was my first experience with chanting Om.  I somehow felt like I had always known it, like it had always been a part of my life.  But then, it had.  In the Upanishads it is described as the ultimate reality, the whole world, the cause of the Universe.  If it is indeed the cause of the Universe, then it is part of me and I of it.  When I listen to its sound, I feel at hOMe.

Upanishads describe Om as the ultimate reality, the whole world, the cause of the Universe.

A year or two later,  I was well into my teaching career and I joined a group of entrepreneurs and town government employees in an effort to help build small, local businesses.  The first morning we went through introductions and I explained that I had moved back to my small hometown and was a yoga teacher.  This caught many by surprise as they had never heard of yoga before or thought it was something that went against their fairly conservative beliefs.  Several enjoyable conversations ensued over that week and I was able to enlighten a sizable population on the benefits of yoga.  I  was also able to land a teaching gig at the local community college.  All in all, it was a very productive week.

But the magic that happened within that week had nothing to do with jobs or business.  On the last day of the conference, Nancy, a very sweet, stylish, 60-something woman came up to me.  She told me a story of how two years prior her daughter had given her a necklace.  She thought it was pretty, but it really wasn’t her style and she didn’t even know what it was.  But as it was a gift, she kept it.  When she met me, she knew that I was meant to have it.  She pulled out a beautiful turquoise necklace with a black Om symbol.  My breath caught in my throat and my heart beat a little faster.  I was transported back to Shoshoni and I could hear again that beautiful sound and feel that delicious, soul-deep vibration.  I took it from her with tears in my eyes and so much gratitude in my heart.  I felt as though it was meant for me, as if it too had come hOMe. 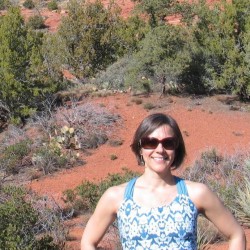 Dena Stoltz
Dena has studied yoga for 18 years and has been teaching for thirteen. Her style brings the attention inside; not looking for the perfect pose, but aligning with the spirit within and allowing that to shine. Through teaching she has found a deep connection with her students and this brings her great joy. She introduced yoga to several small Kansas towns in early 2002 as one of the first teachers in the area. She relocated to Boise in 2010 because her husband had an opportunity to learn to fly helicopters. There she and her family enjoy spending time outdoors, hiking, biking, skiing, and camping. She's an archery fanatic and loves how it complements the teachings of yoga and vice versa. She is currently working on her 500 RYT through Shanti Yoga School.

Latest posts by Dena Stoltz (see all)
« Dharma and the Nine Distractions
Om: A Poem about Mindfulness »

The only relevant yoga is “your yoga”. #sharey

Raise your words, not your voice. It is rain that

Do practice while you can. You'll need it when you